The Center for Biological Diversity sued the Trump administration yesterday for denying Endangered Species Act protection to the Pacific walrus. The lawsuit is being filed just as Arctic sea ice coverage is hitting a record low.

The U.S. Fish and Wildlife Service found in 2011 that the walrus warranted protection because climate change is destroying the sea ice it needs to survive. But a few months after Trump took office, the agency reversed course and found the species no longer merits protection. Why?

“The Trump administration’s outrageous reversal is a deathblow for the Pacific walrus,” Emily Jeffers, an attorney with the Center said in a statement. “Arctic ice is disappearing at a record rate, and walruses are suffering catastrophic habitat loss. Rather than ignoring the science, the administration needs to give these magnificent creatures the protection they desperately need to survive which they legally deserve. 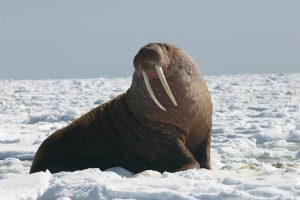 In 2011, following the Center’s 2008 petition to list the walrus as threatened or endangered under the Endangered Species Act, the center determined that the Pacific walrus warranted protection under the law. Officials concluded that climate change would destroy the walrus’s sea-ice habitat and cause a substantial population decline.

Six years later, the Trump administration executed a 180-degree reversal, determining in October that listing the Pacific walrus as threatened or endangered was “not warranted.” The Service reached this conclusion despite strong science demonstrating the Pacific walrus faces extinction within the foreseeable future.

The case for listing the species has only grown stronger since 2011 as Arctic sea-ice extent hit numerous record lows; summer sea ice continues to disappear from the walrus’s foraging grounds in the Chukchi Sea; and new information from the international scientific consensus on climate change point to a dramatic loss of the walrus’s sea-ice habitat through at least the end of the century.

Pacific walruses, known for their massive size and an ever-growing pair of tusks, depend on Arctic sea ice for their essential life functions. Without strong action to reduce carbon pollution, scientists project that summer sea ice will disappear in the next decade or two.