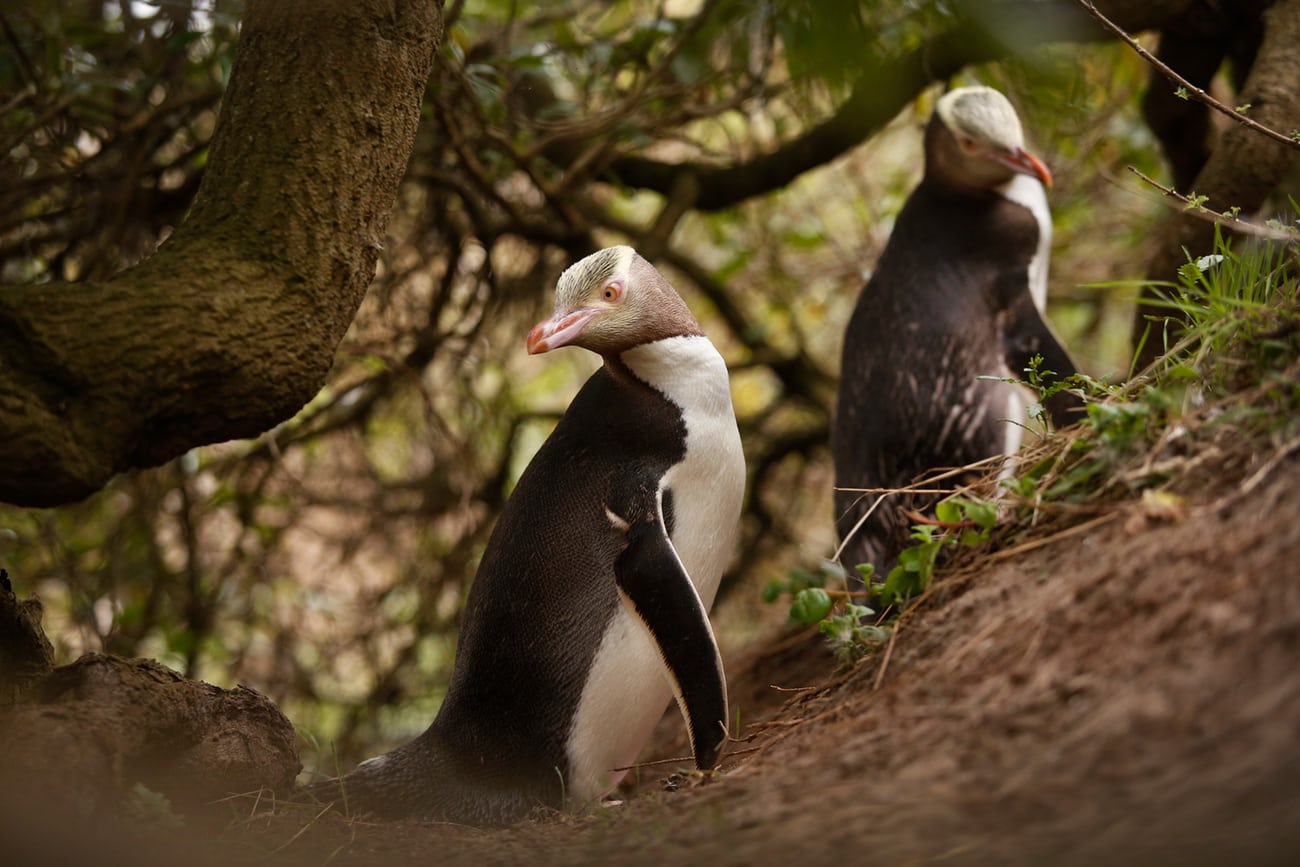 At the end of the day, having avoided being bitten on the flipper by a barracouta or chewed by a shark, a shy yellow-eyed penguin prepares to come ashore and make its bed in the bush. Emerging from the surf, he scans the apparently empty sandy strip with his beady eyes for signs of danger. Though he is a swift swimmer, he is fettered by his stumpy legs when ashore. But he grows confident as he comes close to the dense brush.

Then the unexpected happens: eight dark figures spring from three different locations and sprint toward the hoiho – or “little shouter” as the yellow-eyed penguin is known in Māori. He has been bushwhacked like this before and offers only token resistance. “Oh no, not again!” he may have thought.

Luckily these marauders come from the University of Otago and are here to retrieve a GPS tracker. PhD student Mel Young and her helpers are trying to shine a light on the dark plight of these endangered penguins. 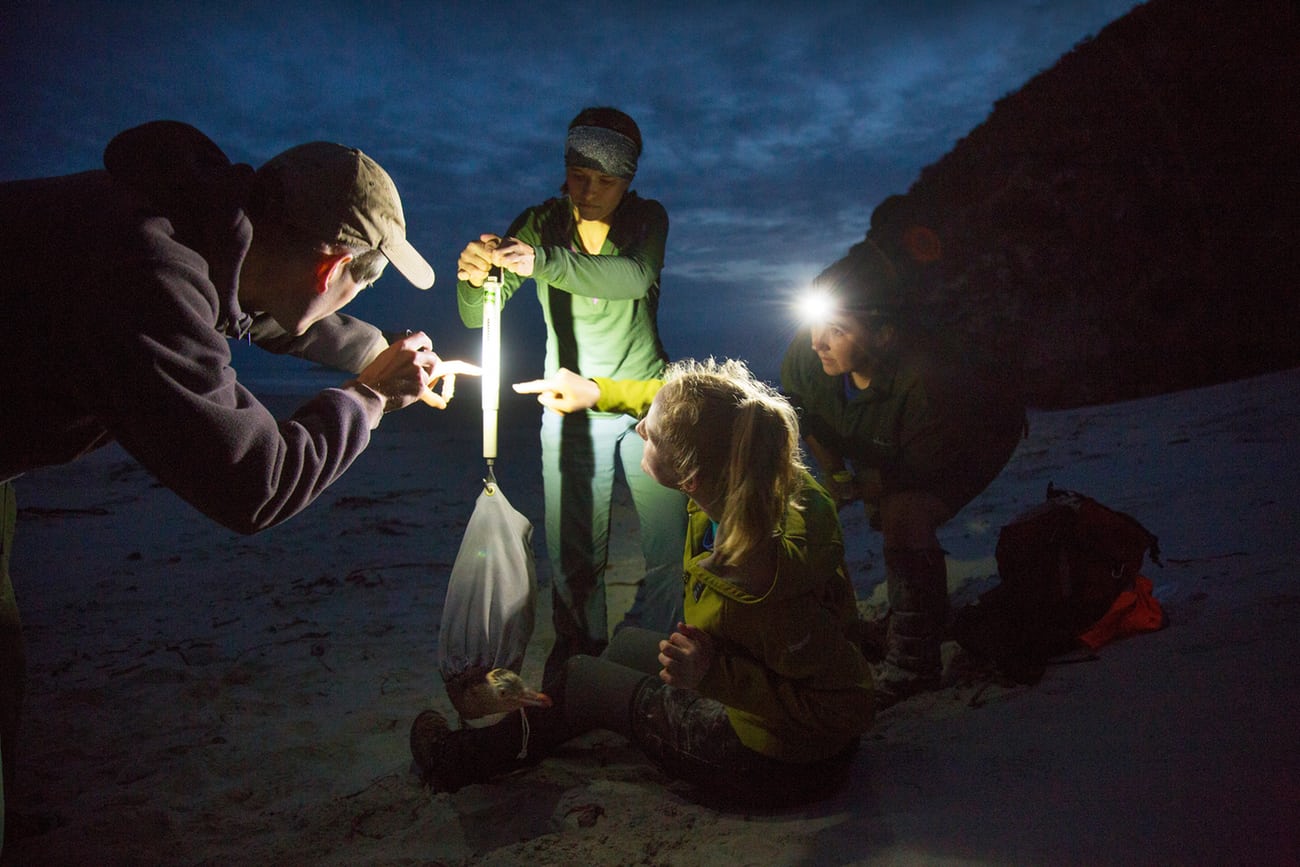 (Above) Volunteers including Jordana Whyte and Bryony Alden weigh a penguin; (below) Mel Young holds a penguin. All photographs by Murdo Macleod. 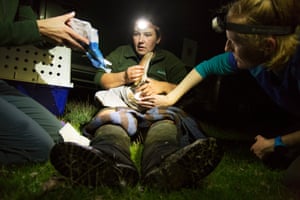 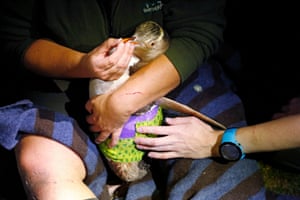 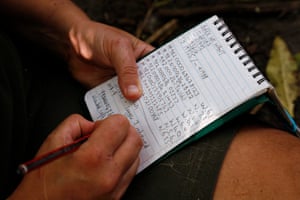 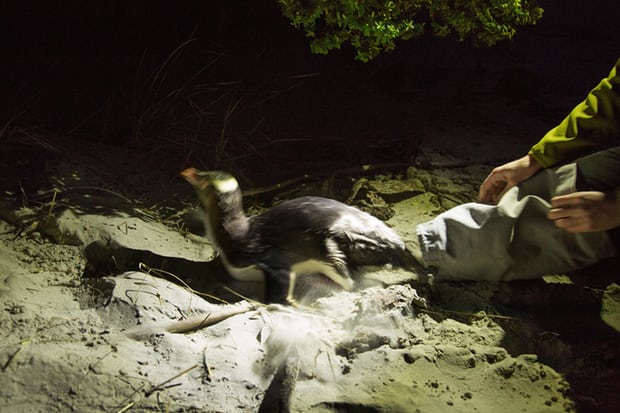 This drama is unfolding at the Yellow-eyed Penguin Trust’s Otapahi reserve in the Otago peninsula of New Zealand, a protected space where the hoiho, which is unique to New Zealand, can hope to live and breed relatively undisturbed. There are between 3,200 and 3,600 yellow-eyed penguins left in the wild, down from nearly 7,000 18 years ago. With an 80% loss rate for each year’s chicks, the hoiho’s existence is in peril.

Predation, habitat loss, disturbance, starvation, disease and global warming are just some of their troubles. In the ocean their predators include barracouta, sharks, seals and sea lions, while on land, cats, stoats and ferrets lie in wait. Inappropriate behaviour by visitors has also threatened nesting and moulting birds, and after years of poor food supply a missed meal for a chick could mean the difference between life or death.