The concentrations of eight selected heavy metals, Pb, Cd, Cu, Ni, Cr, As, Hg, and Zn in seven consumable vegetables harvested at some dump sites and farm lands ( as control) in Port Harcourt and its environs in Rivers State Nigeria were investigated. The soils in which they are grown were also analysed using Solaar Thermo Elemental Atomic Absorption Spectrometer (AAS) model SE 71906. The vegetables plants investigated were Bitter leaf (Vernonia Amgdylina, Pumpkin (Telfairia Occidentalis), Green Vegetable (Amaranthus hybridus), Okro plant (Abelmoschus esculentus L), Green Amaranths (Amaranthus viridis). The results obtained show that the concentration of heavy metals in the dumpsites were significantly higher (P<0.05) and varies from the results for the farmlands (control).  Similarly there were more heavy metals in vegetables harvested at dumpsites than the control sites. Zn concentration in vegetables at both sites Zn (31.6 ± 0.23 – 68.04 ± 0.1 mg/kg) and Zn (10.36 ± 0.18 – 26.62 ± 0.26 mg/kg) respectively. Concentration of other metals followed the order, Ni> Cu>Cr>Pb>Cd >As. Concentrations of Pb, Cd, Cr in all the vegetables from the dumpsites were extremely higher than the WHO permissible standard limit.  While the Ni, Cu were below permissible limit only in some vegetables. Hg concentration was minimal in dumpsite vegetables and was not detected in samples from the control sites.  The significantly high level of heavy metal concentrations, above the World Health Organization (WHO) permissible limits, indicates bioaccumulation in the vegetables and subsequent bioavailability when consumed. This can pose great health risk to humans and animals through the food chain. 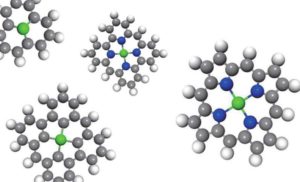 Acetamide Derivatives of N-Methyl Hydroxyaniliniumsulfate: Design, Synthesis, Spectral Characterization and in silico Study to Report them as Therapeutic Agents

Synthesis and Characterization of a Butenafine Analogue

Synthesis and Characterization of 4-[(3,5-Dimethyl-1H-pyrazol-1-yl)Methyl]-4-Methyl-2-Phenyl-4,5-Dihydrooxazole| Chapter 11 | Theory and Applications of Chemistry Vol. 4