The Zonal Agricultural Research Station, University of Agricultural Sciences, Bangalore, has been carrying out the research on major crops like Rice (Oriza sativa L.)., Finger millet                           (Eleusine coracana)., Sugarcane (Saccharum officinarum)., Maize (Zea mays L.) etc., considering the agro-climatic, location specific and need based demands of the farmers since its inception 1930s, many good agricultural practices were developed and they were transferred to farmers. There was need to evaluate the performance of these technologies in farmers’ field from time to time. One such technology selected for the study is, the sugarcane variety CO-86032 which was released during 2003-04 and it was compared with the local prevailing check variety CO-62175. An Ex-post-facto survey type of research design was adopted. The research objectives of the study are to find out the perception of farmers regarding performance of these farm technologies on their field regarding cane yield, income generated out of it and to find out association between cane yields and social factors affecting it. The study was conducted in Mandya, Maddur and Srirangapatna taluks of Mandya district, Karnataka state during 2009-10 and was retested in 2016 on pilot sample to ascertain the impact and performance of technologies among the farmers. The sample size was 270 and the respondents were selected randomly and purposively from afore said taluks of Mandya district. The data were collected from the respondents by administering pre-tested, structured interview schedule. The nominal data were analyzed using Chi square test to draw the inferences. The study found that the local variety CO- 62175 yielded 3.73 ton/ac cane yield more than that of CO- 86032. Majority of the respondents had harvested the cane yield ranging from 51 to 55 ton/ac, from CO-62175 and 56 to 60 ton/ac from CO-62175. Similar cane yield trend was observed in all the three taluks of Mandya district for both the varieties. Regarding jaggery recovery, the respondents obtained 120 kg of jaggery per ton of cane crushed from CO-86032 compared to  95kg from  variety CO-62175, around 25 kg additional jaggery was recovered by crushing one ton cane from CO-86032. The perceived reason of respondents was more quality jiggery recovery from crushing the cane and they were willing to adopt the CO-86032 than that of CO-62175 variety. In case of finding out the association between the cane yield and the social variables; family size, land holding and education level of respondents found to have no significant association. It implies that all the 3 independent social variables had no influence on cane yield including the education level. The literacy had not played a key role in enhancing the crop yields. Both illiterate and literate respondents had obtained same crop yield without much difference. The implications of the findings are, though the cane yield of CO-86032  is relatively less compared to CO62175, majority of the farmers were willing go for continued adoption of it, as it had multiple advantages, such as, high sugar content, pleasant color of consumer preference, better market price etc. Thus it should be promoted in large area in the Mandya and adjoining districts of Karnataka where similar agro climatic conditions exists. Further, there is a need to evolve high yielding varieties retaining the some of its beneficial attributes of CO-86032. The station has released other high yielding varieties which have higher tonnage and sugar recovery, which is beneficial to the both Sugar factory and to the farmers, the former get more quantity of sugar and the latter get more price and profit for more weightage. As of now, the growers have been preferring these verities and has occupied large area in the irrigated command areas.

Financial and Non-financial Performance of Small Businesses in Nigeria: An Empirical Evidence of the Role of Environmental Factors 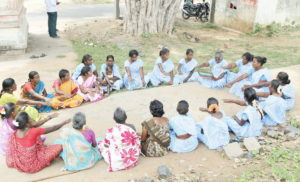 Savings for Retirement in the Employees Provident Fund (EPF): A Profile of Contributors and Their Views towards the EPF Scheme

Managing Human Capital: How to Use Knowledge Management to Transfer Knowledge in Today’s Multi-Generational Workforce

Reverse Mortgages: Challenging the Trade-off between Financial and Real Assets