Everyone forgets. As we grow older or have a brain injury or a stroke or develop a neurodegenerative disease, we forget much more often. Is there a technological intervention that can help us remember? That is the $50 million dollar question funded by DARPA’s Restoring Active Memory (RAM) Program, which has focused on intracranial electrodes implanted in epilepsy patients to monitor seizure activity.

Led by Michael Kahana’s group at the University of Pennsylvania and including nine other universities, agencies, and companies, this Big Science project is trying to establish a “closed-loop” system that records brain activity and stimulates appropriate regions when a state indicative of poor memory function is detected (Ezzyat et al., 2018).

However, during the recent CNS symposium on Memory Modulation via Direct Brain Stimulation in Humans, Dr. Suthana suggested that “Stimulation of entorhinal white matter and not nearby gray matterwas effective in improving hippocampal-dependent memory…” 2

Meanwhile, the Penn group and their collaborators moved to a different target region, which was also discussed in the CNS 2018 symposium: “Closed-loop stimulation of temporal cortex rescues functional networks and improves memory” (based on Ezzyat et al., 2018). 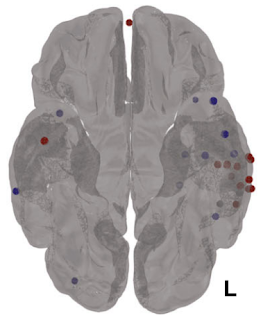 Twenty-five patients performed a memory task in which they were shown a list of 12 nouns, followed by a distractor task, and finally a free recall phase, where they were asked to remember as many of the words as they could. The participants went through a total of 25 rounds of this study-test procedure.

Meanwhile, the first three rounds were “record-only” sessions, where the investigators developed a classifier — a pattern of brain activity —that could predict whether or not the patient would recall the word at better than chance (AUC = 0.61, where chance =.50).” 3 The classifier relied on activity across all electrodes that were placed in an individual patient.

Memory blocks #4-25 alternated between Simulation (Stim) and No Stimulation (NoStim) lists. In Stim blocks, 0.5-2.25 mA stimulation was delivered for 500 ms when the classifier AUC predicted 0.5 recall during word presentation. In NoStim lists, stimulation was not delivered on analogous trials, and the comparison between those two conditions comprised the main contrast shown below. 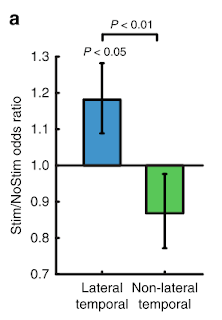 The authors found that that lateral temporal cortex stimulation increased the relative probability of item recall by 15% (using a log-binomial model to estimate the relative change in recall probability). {But if you want to see all of the data, peruse the Appendix below. Overall recall isn’t that great…}

Lateral temporal cortex (n=18) meant MTG, STG, and IFG (mostly on the left). Non-lateral temporal cortex (n=11) meant elsewhere (see Appendix below). The improvements were greatest with stimulation in the middle portion of the left middle temporal gyrus. There are many reason for poor encoding, and one could be that subjects were not paying enough attention. The authors didn’t have the electrode coverage to test that explicitly. This leads me to believe that electrical stimulation was enhancing the semantic encoding of the words. The MTG is thought to be critical for semantic representations and language comprehension in general (Turken & Dronkers, 2011).

Thus, my interpretation of the results is that stimulation may have boosted semantic encoding of the words, given the nature of the stimuli (words, obviously), the left lateralization with a focus in MTG, and the lack of an encoding task. The verbal memory literature clearly demonstrates that when subjects have a deep semantic encoding task (e.g., living/non-living decision), compared to shallow orthographic (are there letters that extend above/below?) or phonological tasks, recall and recognition are improved. Which led me to ask some questions, and one of the authors kindly replied (Dan Rizzuto, personal communication). 4

Although this method may have therapeutic implications in the future, at present it is too impractical, and the gains were quite small. Nonetheless, it is an accomplished piece of work to demonstrate closed-loop memory enhancement in humans.

1 Since that time, however, the UCLA group has reported that theta-burst microstimulation of….

2 Unfortunately, I was running between two sessions and missed that particular talk.

3 This level of prediction is more like a proof of concept and would not be clinically acceptable at this point.

4 Thanks also to Youssef Ezzyat and Cory Inman, whom I met at the symposium. 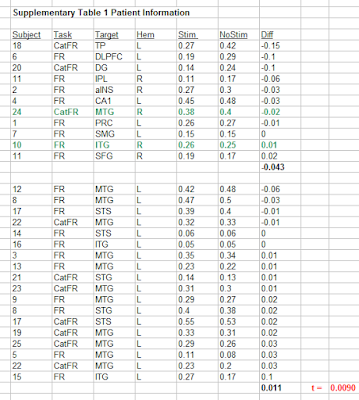 In the table above, Stim and NoStim recall percentages are for ALL words in the blocks. But: