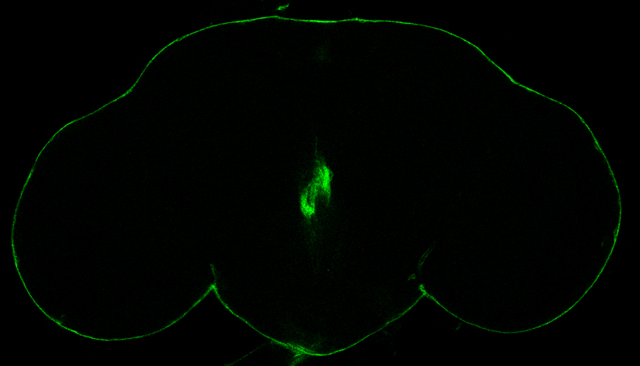 Getting drugs past the blood-brain barrier (BBB) is notoriously difficult, but a study published today (March 8) in Cell offers a potential solution. Researchers found that the Drosophila BBB has a molecular clock that renders it more or less penetrable during certain hours of the day. Indeed, giving the flies a drug for treating seizures at night was more effective than during the day.

The authors “give mechanistic insight for how time-of-day difference in blood-brain barrier permeability comes to be,” says Robert Dallmann, a circadian biologist and pharmacologist at University of Warwick in the United Kingdom who did not participate in the study. “They even show that time of treatment really makes a difference.”

Researchers and clinicians have found that the timing of medical treatments—including vaccines and chemotherapy for brain cancer—can influence their efficacy, but it is still unclear how the circadian clock exerts these effects.

To investigate the permeability of the BBB, a team led by Amita Sehgal of the University of Pennsylvania injected fruit flies with fluorescent dye at four-hour timepoints throughout the day. They found that more of the dye made it into the insects’ brains in the early evening than at other times (flies are most active during the day). When the researchers injected flies lacking the period gene, which encodes an essential element of the circadian clock, they observed no difference in the levels of dye in the flies’ brains over the course of the day, suggesting that permeability depends on the molecular clock.

“There’s gap junctional communication between two cell types that accounts for the rhythmicity in one cell conferring rhythms on another cell,” says Sehgal.

The researchers fed the anti-seizure drug to a strain of flies that can be mechanically stimulated to have seizures. Flies that were medicated in the early evening showed faster seizure recovery times than flies that got the drug in the afternoon. In epileptic flies without a molecular clock, the drug worked just as fast regardless of the time of day it was received.