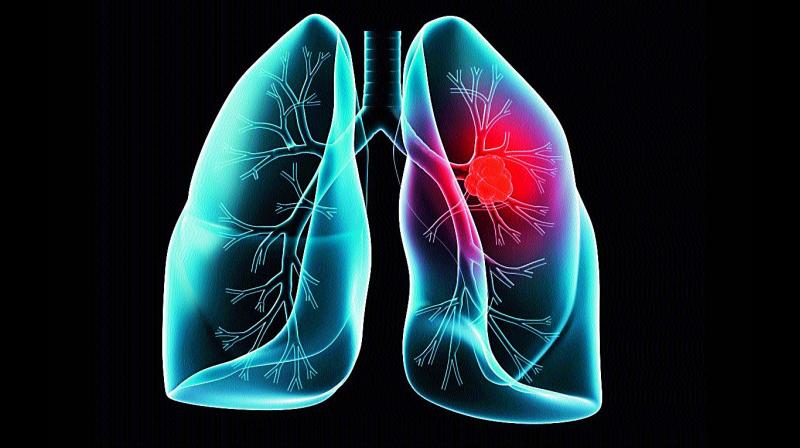 Summary: Researchers have discovered a new kind of small-cell lung cancer (SCLC). The discovery paves the way for developing personalized medicine approaches to target this previously unnoticed form of the disease.

Researchers have discovered a new kind of small-cell lung cancer (SCLC). The discovery paves the way for developing personalized medicine approaches to target this previously unnoticed form of the disease.

“Cancer is not one thing, it’s actually hundreds of distinct diseases.” This common refrain helps explain the frustrating experience oncologists have in testing a promising new drug only to find that it works well in some patients but fails for the majority. Such experiences have led researchers to believe that the more they can distinguish tumor types based on meaningful biological signatures, the better chance they have of finding subsets of patients that will respond to specific drug candidates.

One type of cancer in desperate need of new drug is SCLC, a cancer without a specific treatment that often spreads early. Chemotherapy, radiotherapy, and surgery enable only 6% of patients to survive 5 years from the time of their diagnosis. About 10%-15% of all lung cancers are SCLC.

Fresh insight comes from an analysis of gene activity in human SCLC tumors that is reported today in Genes & Development. It reveals an unexpected activity pattern in around 20% of samples. The research team, led by Christopher Vakoc, M.D., Ph.D., a Cold Spring Harbor Laboratory (CSHL) Associate Professor, found a paucity of neuroendocrine markers in pulmonary neuroendocrine cells, a cell type thought to be the source of SCLC.

To further characterize this minority of cells, Vakoc and colleagues used a method they developed in 2015 that employs the gene-editing tool CRISPR to screen for specific proteins that are critical to the growth of various human cancer cell lines, including SCLC lines. Using this “CRISPR screen,” the team found that a transcription factor called POU2F3 is expressed exclusively in the minority of SCLC tumors with low levels of neuroendocrine markers. It turns out that this variant form of SCLC tumors are derived from a separate class of rare cells called tuft cells.

“We were using the CRISPR screen to discover new vulnerabilities in this disease that we didn’t know about before,” Vakoc says. “The surprise is that in the process, we discovered a new form of lung cancer.”

Developing drugs that specifically target the function of POU2F3 may be particularly effective in the subset of patients with tumors that express high levels of this transcription factor.

“In the past, we’ve lumped the different forms of SCLC together because they look similar on a microscope slide, but we now have some molecular tests that can easily discriminate these malignancies,” says postdoctoral investigator Yu-Han Huang, first author on the new paper. “Our findings suggest that we should be designing clinical studies for them separately, to find therapies that might cater to the different types of tumor.”

Vakoc’s team is currently looking for collaborators to do preclinical tests in mice to test compounds that target POU2F3. They also plan to use their CRISPR-based stress test to look for variant types of pancreas cancer which they hope might provide similarly specific targets for treatments.

Materials provided by Cold Spring Harbor Laboratory. Note: Content may be edited for style and length.