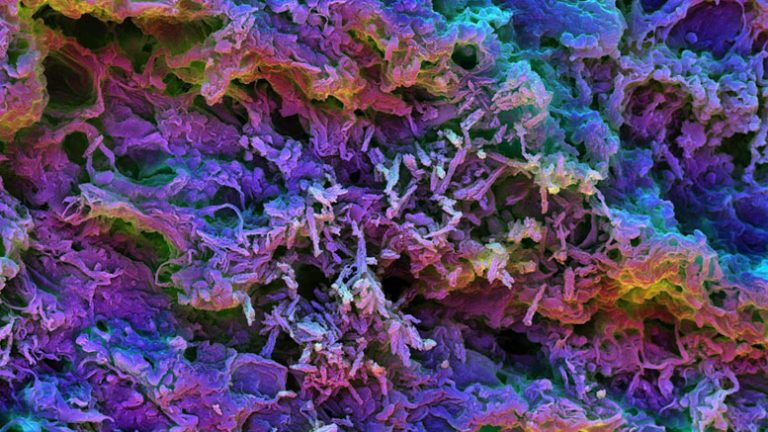 This scanning electron micrograph image shows the MSR-PEI scaffold presenting tumor-expressed peptides. After injection under the skin of mice the biomaterial is filling with dendritic cells that can be seen here as the small round shapes interacting with the spikey scaffold structure. Credit: Wyss Institute at Harvard University

As cancer cells continuously mutate their DNA, they also produce proteins that are altered from their normal counterparts by small changes in their peptide sequences. Just like every cell in our body presents part of its peptide repertoire to our immune system to identify itself as “self,” cancer cells present their faulty neopeptides (or neoantigens), revealing themselves as foreign or “non-self.” After taking up these neoantigens, the immune system’s dendritic cells (DCs) can initiate strong T cell responses to attack the very cancer cells that express them.

Cancer researchers have recognized the potential of neoantigens as vaccine targets, and in animal models and early human clinical trials, they succeeded in identifying and creating cocktails of neoantigens to vaccinate patients against their own cancers. Generating effective vaccines, however, is still a challenging and cumbersome endeavor, as neoantigen-containing vaccine components often require complex chemical or physical modifications, and the neoantigens can be cleared from the body rapidly, which potentially limits their presentation to DCs.

A new study published by a team of researchers at Harvard’s Wyss Institute for Biologically Inspired Engineering, the Harvard John A. Paulson School of Engineering and Applied Sciences (SEAS), and the Dana-Farber Cancer Institute describes a vaccine approach that uses an injectable scaffold loaded with a selection of tumor-expressed peptides. In mouse models, the vaccines were shown to eradicate large tumors and tumor metastases, create a memory of tumors enabling future tumor rejections, and strongly synergize with checkpoint therapy, a different immune therapy approach that is used clinically to restimulate fading anti-tumor immunity in cancer patients.

“There is tremendous enthusiasm for using neoantigens in immunotherapy as predicting them in individual tumors becomes more and more reliable. Our materials approach is able to mix and match predicted neoantigens very easily and efficiently in a single scaffold that as a delivery vehicle could be plugged into existing pipelines to enable more effective personalized cancer treatments,” said Wyss Institute Core Faculty member David Mooney, Ph.D., who led the study. He is also leader of the Wyss Institute’s Immunomaterials Platform and the Robert P. Pinkas Family Professor of Bioengineering at SEAS.

The team leveraged their previously developed programmable biomaterial made from tiny mesoporous silica rods (MSRs) that can be injected under the skin where they spontaneously assemble into a 3-dimensional scaffold that is able to attract and stimulate DCs. In their new study, they coated the MSRs with polyethyleneimine (PEI), a polymer that has been previously used to deliver DNA and proteins to cells and that was surmised to have immune-stimulatory effects. “This allowed us to achieve two things: it enabled ready absorption of multiple peptides regardless of their inherent properties without the need to further modify them; and by being taken up by DCs together with the peptides, PEI enhanced the stimulation of DCs and the ensuing tumor-directed cytotoxic T cell responses in our mouse models,” said first-author Aileen Li, Ph.D., who performed her graduate work with Mooney and now is a Postdoctoral Fellow at the University of California San Francisco.

In addition to the PEI coating, the vaccines also contained factors that help them attract DCs and boost immune functions. Comparing them to control vaccines that lacked PEI but that had all other components, the team found them to be considerably more efficient in activating DC populations, stimulating their interactions with T cells in nearby lymph nodes, and driving the generation of circulating killer T cells that are capable of recognizing the tumor-specific peptides.