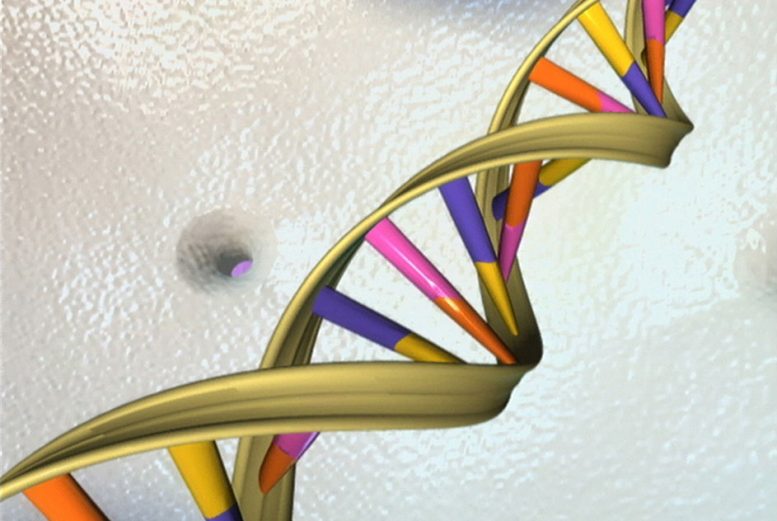 Just like any long polymer chain, DNA tends to form knots. Using technology that allows them to stretch DNA molecules and image the behavior of these knots, MIT researchers have discovered, for the first time, the factors that determine whether a knot moves along the strand or “jams” in place.

“People who study polymer physics have suggested that knots might be able to jam, but there haven’t been good model systems to test it,” says Patrick Doyle, the Robert T. Haslam Professor of Chemical Engineering and the senior author of the study. “We showed the same knot could go from being jammed to being mobile along the same molecule. You change conditions and it suddenly stops, and then change them again and it suddenly moves.”

The findings could help researchers develop ways to untie DNA knots, which would help improve the accuracy of some genome sequencing technologies, or to promote knot formation. Inducing knot formation could enhance some types of sequencing by slowing down the DNA molecules’ passage through the system, the researchers say.

MIT postdoc Alexander Klotz is the first author of the paper, which appears in the May 3 issue of Physical Review Letters.

A knot near the end of a stretched DNA molecule is driven toward the end and unties, leaving an unknotted molecule. (Image: Alex Klotz)

Doyle and his students have been studying the physics of polymer knots such as DNA for many years. DNA is well-suited for such studies because it is a relatively large molecule, making it simple to image with a microscope, and it can be easily induced to form knots.

“We have a mechanism that causes DNA molecules to collapse into a tiny ball, which when we stretch out contains very big knots,” Klotz says. “It’s like sticking your headphones in your pocket and pulling them out full of knots.”

Once the knots form, the researchers can study them using a special microfluidic system that they designed. The channel is shaped like a T, with an electric field that diverges at the top of the T. A DNA molecule located at the top of the T will be pulled equally toward each arm, forcing it to stay in place.

The MIT team found that they could manipulate knots in these pinned DNA molecules by varying the strength of the electric field. When the field is weak, knots tend to move along the molecule toward the closer end. When they reach the end, they unravel.

“When the tension isn’t too strong, they look like they’re moving around randomly. But if you watch them for long enough, they tend to move in one direction, toward the closer end of the molecule,” Klotz says.

When the field is stronger, forcing the DNA to fully stretch out, the knots become jammed in place. This phenomenon is similar to what happens to a knot in a bead necklace as the necklace is pulled more tightly, the researchers say. When the necklace is slack, a knot can move along it, but when it is pulled taut, the beads of the necklace come closer together and the knot gets stuck.

“When you tighten the knot by stretching the DNA molecule more, it brings the strands closer to each other, and this ramps up the friction,” Klotz says. “That can overwhelm the driving force caused by the electric field.”

Dmitrii Makarov, a professor of chemistry at the University of Texas at Austin, who was not involved in the study, describes it as “an elegant experimental demonstration that knots in DNA can ‘jam’ under tension, just like macroscopic knots do in our everyday experience. This work also provides important fundamental insights into friction on molecular scale, a phenomenon that is still poorly understood.”

DNA knots also occur in living cells, but cells have specialized enzymes called topoisomerases that can untangle such knots. The MIT team’s findings suggest a possible way to remove knots from DNA outside of cells relatively easily by applying an electric field until the knots travel all the way to the end of the molecule.

This could be useful for a type of DNA sequencing known as nanochannel mapping, which involves stretching DNA along a narrow tube and measuring the distance between two genetic sequences. This technique is used to reveal large-scale genome changes such as gene duplication or genes moving from one chromosome to another, but knots in the DNA can make it harder to get accurate data.

For another type of DNA sequencing known as nanopore sequencing, it could be beneficial to induce knots in DNA because the knots make the molecules slow down as they travel through the sequencer. This could help researchers get more accurate sequence information.

Using this approach to remove knots from other types of polymers such as those used to make plastics could also be useful, because knots can weaken materials.

The researchers are now studying other phenomena related to knots, including the process of untying more complex knots than those they studied in this paper, as well as the interactions between two knots in a molecule.