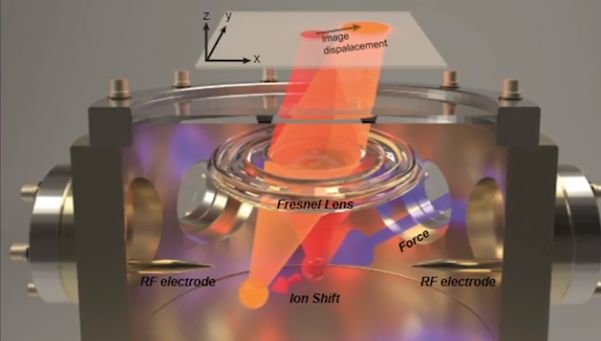 Researchers at Griffith University working with Australia’s Commonwealth Scientific and Industrial Research Organisation (CSIRO) have unveiled a stunningly accurate technique for scientific measurements which uses a single atom as the sensor, with sensitivity down to 100 zeptoNewtons.

Using highly miniaturised segmented-style Fresnel lenses – the same design used in lighthouses for more than a century – which enable exceptionally high-quality images of a single atom, the scientists have been able to detect position displacements with nanometre precision in three dimensions.

“100 zeptoNewtons is a very small force. That’s about the same as the force of gravity between a person in Brisbane and a person in Canberra. It can be used to investigate what’s occurring on surfaces, which will help miniaturise ion trap type quantum computers and other quantum devices.”

Griffith researchers have been pioneering the application of such lenses in quantum physics since 2011, but this is the first time they have been used to achieve such high levels of accuracy in sensing the forces influencing a particular atom.

By intentionally moving their optics slightly out of focus, the researchers were able to measure displacements in all three dimensions, with the third direction determined by if the atom was shifting back into focus or further out of focus.

Along with the research’s applications for fundamental physics of magnetic, atomic, quantum and surface phenomena, Dr Streed is also working as part of Griffith’s Institute for Glycomics to adapt these sorts of quantum technologies for medical and biological research.

“With the Institute for Glycomics I’m also interested in developing this into a tool to measure the electrical fields outside a single isolated biomolecule, like the dipole moment, as a new way to help understand how they behave,” he said.

The heightened accuracy of the technique is precisely due to the use of a solo atom as a ‘probe’ in obtaining these measurements. Previous techniques similar to this used many atoms as the electric force sensor and were limited to only one dimension.

“A single-atom 3D sub-attonewton force sensor” will appear in the 23 March 2018 edition of Science Advances.