The Weird World Inside a Pitcher Plant 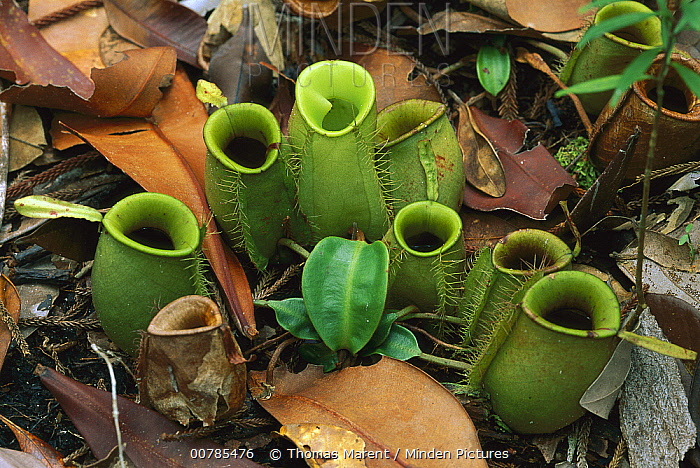 A species of pitcher plant found in Singapore isn’t very good at dissolving the prey it catches, but it gets nutritional help from worm larvae that live and eat within its maws.

On the soggy floor of one of the only remaining intact forests on the island nation of Singapore, the egg-sized heads of carnivorous creatures emerge from decaying leaves. They appear to be belching, or singing, or screaming out the catch phrase of their cousin in Hollywood — “Feed me Seymour.”

This is Nepenthes ampullaria, an unusual pitcher plant found on the islands of Southeast Asia and the Malay Peninsula. And its “Seymour” is the worm larva of Xenoplatyura beaveri, a species of fungus gnat that develops inside the plant’s mouth. When grown, it looks like a mosquito with big biceps.

They’ve got a strange relationship, these two.

The plant gives the gnat baby a safe place to eat and develop. In exchange, the baby builds a web across the plant’s lips, captures and eats other insects and then defecates into its maw, or pitcher. The plant eats the ammonium-rich droppings. And all is well in this miniature world of weird.

It’s not romantic. It’s not sweet. But researchers call this relationship “mutualistic” in a study published Wednesday in Biology Letters. Their findings, based on laboratory experiments that simulated this insect-plant interaction in the wild, suggest that cohabitation may have its benefits for these two obscure organisms. How tiny pitcher plant communities like this one and others the group is studying function may reveal secrets of plant and insect life, said Weng Ngai Lam, a graduate student in botany at the National University of Singapore, who led the research.

These pitcher plants carry out a quirky version of their family’s strategies for surviving in a nutrient-poor environment. The alien mouths of pitcher plants are really just modified leaves shaped like fairy pottery and connected by a vine that can climb dozens of feet into the forest canopy. The pitchers collect rainwater and juices the plant secretes. Animals, mostly insects and the occasional crab or frog, find shelter and grow up inside this wet mouth.