WhatsApp Payments Feature, Based on UPI, Spotted on Android and iOS 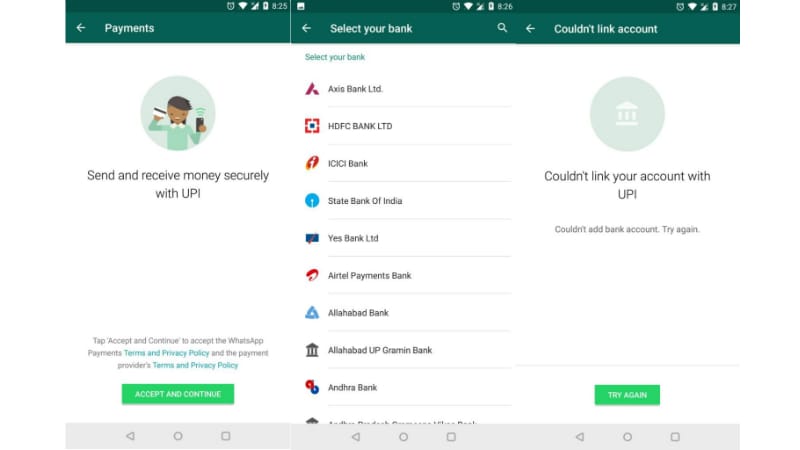 WhatsApp Payments, based on UPI, is available to some users in the Attachments menu

WhatsApp has reportedly started testing out its UPI-based payments feature in India. The new feature, available for select WhatsApp beta users on iOS and Android, enables users to send and receive money using the Indian government’s Unified Payments Interface (UPI) standard. This feature is said to be available on WhatsApp version 2.18.21 for iOS, and version 2.18.41 for Android. Considering the large user base of the messaging app in India, the payments platform’s integration may give another boost to digital payments.

The WhatsApp Payments feature, first spotted by GizmoTimes, is presently available to select users of the beta app in India. The feature can apparently be accessed in a chat window through the Attachments menu. The option is said to be available alongside other options such as Gallery, Video, Documents etc. Clicking on Payments will open a disclaimer window, followed by a list of banks to choose from.

You can then select your preferred bank account to connect with UPI. Notably, you will be asked to create an authentication pin if you haven’t yet used the UPI payments platform. Additionally, you will have to create a UPI account (if you don’t have one previously) through the UPI app or your respective bank’s website/ app.

A report by FoneArena adds that both the sender and receiver need to have the WhatsApp Payments feature to successfully transact on the messaging app. Users have reportedly been facing issues linking their bank accounts to the app, although this is expected from a feature available in beta.

WhatsApp has been known to be considering a UPI-based payments platform since July 2017. The feature was also spotted on an Android beta version back in August last year. Ever since UPI was announced by the government, players like Samsung, Zomato, Google, and, now, WhatsApp have been looking to incorporate it on to their existing hardware and software products.