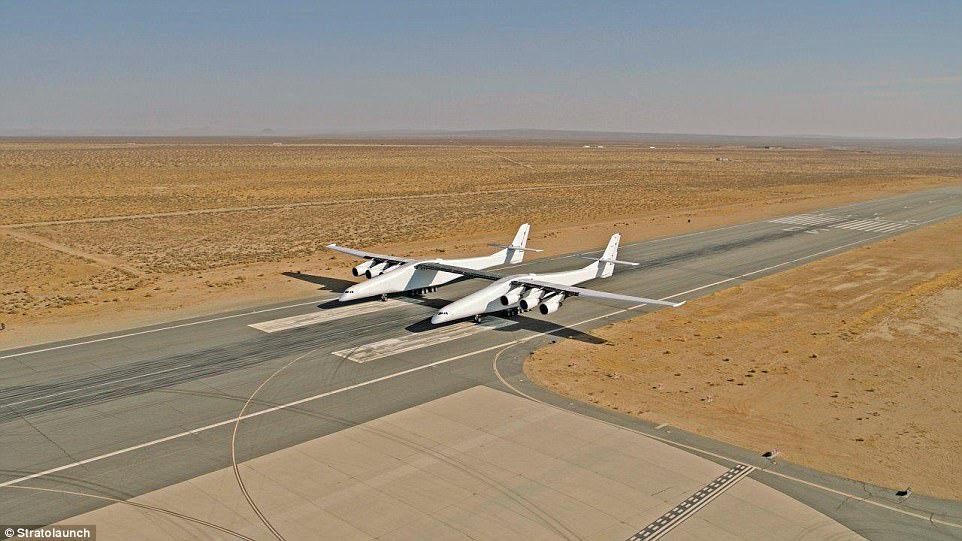 The hefty, double-bodied Stratolaunch airplane — its wingspan of 385 feet (117 meters) is the widest in the world — recently reached a new milestone that brings it one step closer to leaving the ground.

In runway tests conducted on Sunday (Feb. 25) at the Mojave Air and Space Port in Mojave, California, Stratolaunch achieved a taxi speed of 46 mph (74 km/h), according to a tweet posted on Feb. 26 by Paul Allen, founder of Stratolaunch Systems Corp. and co-founder of Microsoft.

Stratolaunch, which weighs about 500,000 lbs. (227,000 kilograms), can carry a payload of up to 550,000 lbs. (250,000 kg). The massive aircraft will transport rocket launchers and satellites bound for low Earth orbit, according to the company’s website. [Stratolaunch Test Photos: The World’s Largest Plane in Action]

Rocket launches from fixed locations can be delayed or halted by inclement weather and may face hazards from airborne traffic. But deploying rockets and satellites from a moving aircraft such as Stratolaunch — which would take off from a runway and release its payloads from a cruising altitude of about 36,000 feet (11,000 meters) — could reduce the risk of launch cancellations or delays from bad weather, making access to space “more convenient, reliable and routine,” Stratolaunch representatives said on the company website.

Stratolaunch resembles two conjoined airplanes connected by a central wing. It utilizes six Boeing 747 engines and has two fuselages, or aircraft bodies; the one on the right is occupied by the flight crew, and the one on the left houses flight data systems. The center wing that joins the fuselages helps to stabilize the aircraft and serves as the attachment point for rocket payloads, according to the Stratolaunch website.
Please visit for full information
Share on TwitterTweet
Share on Pinterest Share
Share on LinkedIn Share
Share on Digg Share