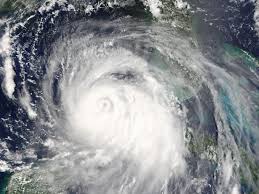 Whipping winds, torrential downpours, power outages and floods — hurricane season in the Atlantic brings a host of dramatic and dangerous weather with it.

But when exactly does the Atlantic hurricane season start and how long does it last? And what can people do to prepare in the face of the most dangerous storms on Earth? From hurricane naming conventions to staying safe in a storm, we’ll detail all you need to know about this year’s hurricane season. (The Atlantic saw its first hurricane of the season on July 6, and it’s called Beryl.)

Hurricanes are the most violent storms on Earth, according to NASA. At heart, hurricanes are fueled by just two ingredients: heat and water.  Hurricanes are seeded over the warm waters above the equator, where the air above the ocean’s surface takes in heat and moisture. As the hot air rises, it leaves a lower pressure region below it. This process repeats as air from higher pressure areas moves into the lower pressure area, heats up, and rises, in turn, producing swirls in the air, according to NASA. Once this hot air gets high enough into the atmosphere, it cools off and condenses into clouds. Now, the growing, swirling vortex of air and clouds grows and grows and can become a thunderstorm.

So, the first condition needed for hurricanes is warmer waters in the Atlantic Ocean, which cause a number of other conditions favorable to hurricanes.

“When the waters are warmer, it tends to mean you have lower pressures. It means a more unstable atmosphere, which is conducive to hurricanes intensifying,” said Phil Klotzbach, an atmospheric scientist at Colorado State University. “These thunderstorms, which are the building blocks of hurricanes, are better able to organize and get going.”

Another key factor: wind shear, or the change in wind direction with height into the atmosphere, Klotzbach said.

(Storms that form on different sides of the equator have different spin orientations, thanks to Earth’s slight tilt on its axis, according to NASA.)

The individual ingredients for hurricanes, however, don’t pop up at random; they are guided by larger weather systems.

“There are two dominant climate patterns that really control the wind and pressure patterns across the Atlantic,” said Gerry Bell, the lead seasonal hurricane forecaster for NOAA’s Climate Prediction Center in Washington, D.C.

The first is the El Niño/La Niña cycle. During an El Niño, in which ocean water around the northwestern coast of South America becomes warner than usual, Atlantic hurricanes are suppressed, while La Niña creates more favorable conditions for hurricanes, Bell said.

The second climate pattern is the Atlantic Multidecadal Oscillation (AMO), which is, as the name implies, a trend that lasts anywhere from 25 to 40 years and is associated with warmer waters in the Atlantic and stronger African monsoons, Bell said.

“When this pattern is in its warm phase, or a warmer tropical Atlantic Ocean, we tend to see stronger hurricane patterns for decades at a time,” Bell told Live Science.

Hurricane scientists at Colorado State University are predicting a slightly above-average Atlantic hurricane season in 2018, they announced on April 5. The researchers, who are part of CSU’s Tropical Meteorology Project team, forecast 14 named storms, and of those about seven will become full-blown hurricanes and three will reach major hurricane strength, meaning a Category 3, 4 or 5 on the Saffir-Simpson scale (sustained winds of at least 111 mph, or 179 km/h).

The low likelihood of a significant El Niño, which puts the brakes on hurricanes, was the primary factor behind the slightly above-average forecast, the researchers said. The CSU team will update their hurricane season forecast on May 31, July 2 and Aug. 2, they said.

On May 24, NOAA released its forecast for the 2018 hurricane season, predicting that the season would be be slightly more active than usual, with a 75 percent chance of an above-normal or near-normal season.

To make their predictions, scientists analyze a host of factors, from wind speed to sea surface temperatures. Because the El Niño/La Niña cycle typically materializes in summer or early fall, forecasts done too early have limited meaning, Bell said. [A History of Destruction: 8 Great Hurricanes]

On July 6, the Atlantic’s first hurricane of the season whipped into shape, transforming from a tropical depression to a full-strength Category 1 hurricane in a mere 24 hours. Called Beryl, the hurricane was packing sustained winds of 80 mph (130 km/h) as of 5 p.m. ET on July 6, with higher gusts, according to NOAA.

Last year ended up being an extremely active hurricane season, with 17 named storms. Of those named storms, 10 became hurricanes, with six of those reaching major hurricane status. The season saw the first two major hurricanes — Harvey in Texas and Irma in the southeastern U.S. — to hit the continental U.S. in 12 years, according to the Climate Prediction Center. Another notably devastating hurricane of 2017, Maria tore through Puerto Rico, leaving most of the island without power and clean water. [Hurricane Maria’s Aftermath: Photos Reveal Devastation on Caribbean Islands]

Hurricane Harvey, which at its peak had maximums sustained wind speeds of 110 mph (175 km/h), making it just shy of a category 4 hurricane when it made landfall in Port Aransas, Texas, according to the National Hurricane Center. Harvey was downgraded to a category 1 storm by the time it hit Houston, but it caused record rainfall, killed at least 60 people, flooded huge swaths of Houston, and caused bilions of dollars in damage, Live Science reported. [In Photos: Hurricane Harvey Takes Aim at Texas]

Barely a week after Harvey’s onslaught, Hurricane Irma, another major hurricane , battered several Caribbean islands, completely destroying the island of Barbuda, grazed Puerto Rico, and barreled directly into Florida, causing massive flooding, storm surges and during the worst part of the storm for Florida, 15 million people, or about three-fourths of Florida’s population, lacked power, according to the Department of Homeland Security. At its peak, Hurricane Irma had maximum sustained wind speeds of 180 mph (290 km/h) and spanned hundreds of miles across, making it one of the strongest and biggest storms ever recorded in the Atlantic Ocean, according to the National Hurricane Center. Hurricane Irma killed at least 69 people across the state of Florida and has also caused billions of dollars in damage.