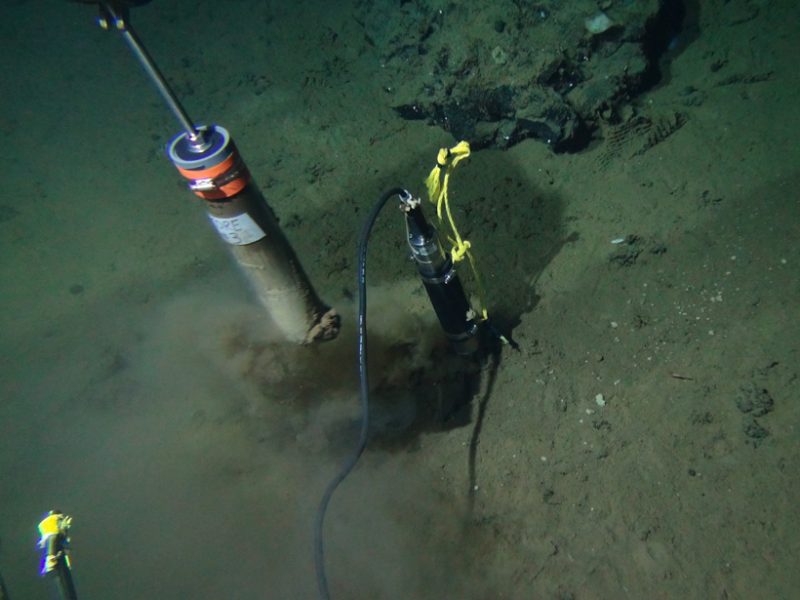 In a chapter of Homer’s Odyssey, Odysseus sails to the underworld and uses necromancy—performing rituals to reawaken the dead—to ask the spirits of Hades to help him find his way home. Echoing this tale from antiquity, scientists today are plumbing the depths of the seafloor in search of answers about necromass—the decomposing remains of dead organisms—and its potential to generate life-sustaining energy for microorganisms that have become buried in seafloor sediments, a phenomenon that is poorly understood.

In a new study, Bradley et al. looked at populations of microbes living in the sediments underlying the South Pacific Gyre (SPG), a vast expanse of ocean between Australia and South America. Buried in layers of sediment on the seafloor, these microbes are likely dominated by heterotrophs, organisms that are unable to make their own food and must consume the remains of other living things to survive—just as humans, fellow heterotrophs, rely on plants and animals for food.

SPG is the most oligotrophic ocean region on Earth, which means it is poor in nutrients but rich in dissolved oxygen. With no light and few nutrients available to them, heterotrophs in this environment often feed off of energy generated through oxidizing the remains of dead cells and other organic materials. Like all living things, these organisms use energy at a rate that meets their power demand. However, the extraordinarily low concentrations of organic materials in sediments in SPG severely restrict the breathing rates of the heterotrophic organisms found there, which means that this area of the seafloor contains comparatively more dissolved oxygen than elsewhere.

By analyzing sediment samples from SPG and applying a mathematical model, the team found that the oxidation of necromass produced within the upper 3 meters of sediment produces just 0.02% of the total power demand of the microbial community in that layer. This number continued to decrease as the scientists probed deeper into the sediment, where the microbial populations are much sparser.

On the other hand, the team found that the oxidization of allochthonous material (ancient organic material that has been buried in place in the sediments), as well as hydrogen, seems to have a much greater impact on the supply of power required by the microbial community.

The team found similar results on a global scale: In layers of sediment less than 10,000 years old, oxidized necromass met 13% or less of the microbial communities’ power needs. In older layers, its contribution was inconsequential.

This study sheds light on one of nature’s murkiest environments—deep below the seafloor—and identifies key sources of power that support life and entire ecosystems in these globally expansive but ultraextreme habitats. (Journal of Geophysical Research: Biogeosciences, https://doi.org/10.1002/2017JG004186, 2018)