Protons May Have Outsize Influence on Properties of Neutron Stars 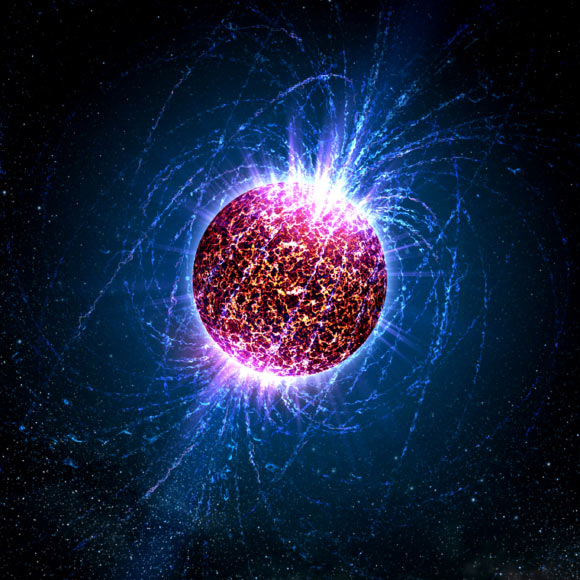 A study conducted by an international consortium called the CLAS Collaboration, made up of 182 members from 42 institutions in 9 countries, has confirmed that increasing the number of neutrons as compared to protons in the atom’s nucleus also increases the average momentum of its protons. The result, reported in the journal Nature, has implications for the dynamics of neutron stars.

The nucleus of an atom is packed with protons and neutrons, though not quite as densely as in neutron stars.

Occasionally, if they are close enough in distance, a proton and a neutron will pair up and streak through an atom’s nucleus with unusually high energy.

Such ‘short-range correlations,’ as they are known, can contribute significantly to the energy balance and overall properties of a given atomic nucleus.

The researchers from the CLAS Collaboration based their study on data collected by the ‘Continuous Electron Beam Accelerator Facility’ Large Acceptance Spectrometer (CLAS), a particle accelerator and detector based at Jefferson Laboratory in Virginia.

CLAS was designed to detect and record the multiple particles that are emitted when beams of electrons impinge on atomic targets.

The team re-analyzed data from an experiment conducted in 2004, in which CLAS produced a 5.01 GeV beam of electrons to probe nuclei of carbon, aluminum, iron and lead. Along with their varying sizes, each of the four types of atoms has different ratios of neutrons to protons in their nuclei, with carbon having the fewest neutrons and lead having the most.

“When the electron comes in and hits the nucleus, we have struck a proton or a neutron. We detected the scattered electron and the scattered proton or neutron,” said Meytal Duer, a graduate student at Tel Aviv University.

“This is the first study to measure both protons and neutrons in short-range correlations and compare the high-momentum fraction carried by each.”

Duer and colleagues found that, as the relative number of neutrons in an atom increased, so did the probability that a proton would form an energetic pair.

The likelihood that a neutron would pair up, however, stayed about the same.

This trend suggests that, in objects with high densities of neutrons, the minority protons carry a disproportionally large part of the average energy.

“When we’ve got 50% more neutrons in the nucleus, we’ve also got 50% more high-momentum protons than we had before,” said MIT researcher Dr. Or Hen, co-author of the study and spokesperson for the data mining collaboration.

“This may be a consequence of the pair preference phenomenon exhibited by short-range correlations. That is, protons and neutrons both prefer to pair with particles different from themselves by 20 to 1. In neutron-rich nuclei, the few protons will have more pairing opportunities than the plentiful neutrons.”

“The trend of energetic protons in neutron-rich atoms may extend to even more neutron-dense objects, such as neutron stars. The role of protons in these extreme objects may then be more significant than people previously suspected,” Dr. Hen added.

“This revelation may shake up scientists’ understanding of how neutron stars behave.”

“For instance, as protons may carry substantially more energy than previously thought, they may contribute to properties of a neutron star such as its stiffness, its ratio of mass to size, and its process of cooling.”

“All these properties then affect how two neutron stars merge together, which we think is one of the main processes in the Universe that create nuclei heavier than iron, such as gold,” he said.”

“Now that we know the small fraction of protons in the star is very highly correlated, we will have to rethink how neutron stars behave.”