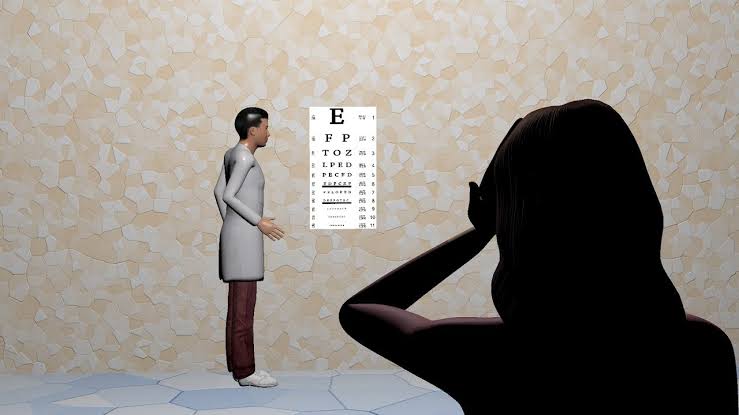 This paper intoduces new principles for the planning and use of letter charts for the measurement of acuity. it’s advocated that the test task should be essentially an equivalent at each size level on the chart. Such standardization of the test task requires the utilization of letters of equal legibility, an equivalent number of letters on each row, and uniform between-letter and between-row spacing. it’s also advocated that, combined with the test task standardization, there should be a logarithmic progression of letter size. Charts incorporating these design features are made. These charts facilitate the utilization of nonstandard testing distances which could be used when there’s low acuity, when examination room layout prevents testing at the quality distance, or when it’s necessary to validate acuity scores or detect malingering. [1]

Three new acuity charts facilitate quantitative use of acuity test results. The charts have high-contrast lettering on washable white polystyrene. Each line has five Sloan letters; the lines are of equal difficulty, and there’s a geometrical progression in letter size from line to line. This provides an identical task for every line on the chart with the letter size being the sole variable. Charts with different letter sequences are used for testing right and left eyes. [2]

Calculating the typical acuity and variance on a series of patients isn’t difficult, but has been done incorrectly in most studies.1 the essential problem relates to the difference between the arithmetic and mean for a group of numbers. For the right average acuity, the mean must be used, which provides significantly different values than the first moment. [3]

The aim of the study was to explain variations in swept visual electric potential (SWEEP-VEP) assessment of acuity and contrast sensitivity in infants and to guage the simplest thanks to estimate visual performance from obtained SWEEP-VEP data. The visual performance of 92 infants (6–40 wk of age) was measured in two separate visits. Results were verified with repeated tests in seven adults. There was a robust association between the 2 measurements of infant acuity (r = 0.91, p < 0.001), with no constant bias and an inter-assay coefficient of variation of 8.4%. [4]

Purpose: to research the thickness of the retinal layers within the preservation of acuity within the early stages of the disease in patients with papilledema related to idiopathic intracranial hypertension (IIH).

Methods: Right eyes of 23 IIH patients and 28 healthy control subjects were included within the study. Peripapillary retinal nerve fibre layer (RNFL) thickness in four quadrants and average ganglion cell layer (GCL) thickness measured by high-definition optical coherence tomography (at a presentation in both groups, and also at 6-months after the presentation within the patient group) were retrospectively analysed. [5]

News Update on Strabismus: May 2020