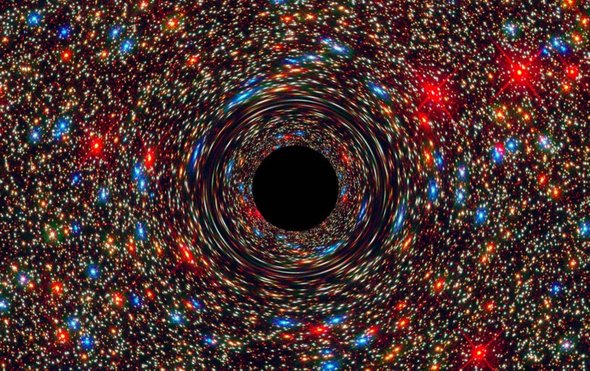 When giant stars die, they don’t just fade away. Instead they collapse in on themselves, leaving behind a compressed stellar remnant, usually a city-size, superdense ball of neutrons appropriately called a neutron star. In extreme cases, however, most theorists believe an expiring giant star will form a black hole—a pointlike “singularity” with effectively infinite density and a gravitational field so powerful that not even light, the fastest thing in the universe, can escape once falling in. Now a new study is reinvigorating an alternate idea, that objects with names such as “black stars,” or “gravastars,” might exist midway between neutron stars and black holes. If real, these exotic stellar corpses should appear nearly identical to black holes save in one key way—they could not irretrievably swallow light.

There are good reasons to seek such alternatives, because black holes raise a host of theoretical problems. For instance, their singularities are supposedly hidden by invisible boundaries known as event horizons. Throw something into a black hole, and once it passes the event horizon it should be gone—forever—with no hope whatsoever of return. But such profound annihilation clashes with other long-cherished laws of physics that suggest the destruction of information is impossible, including information encoded within anything falling into black holes.

Conceived and developed across the past two decades, in part to sidestep such conundrums, models of black stars and gravastars postulate these objects would lack singularities and event horizons. But questions have lingered as to whether such objects could actually form—and remain stable after they did. New research from theoretical physicist Raúl Carballo-Rubio at the International School for Advanced Studies in Italy provides a novel mechanism that might allow black stars and gravastars to exist.

Carballo-Rubio investigated a strange phenomenon known as quantum vacuum polarization. Quantum physics, the best description yet of how all known subatomic particles behave, suggests reality is fuzzy, limiting how precisely one can know the properties of the most basic units of matter—for instance, one can never absolutely know a particle’s position and momentum at the same time. One strange consequence of this uncertainty is that a vacuum is never completely empty but instead foams with so-called “virtual particles” that continuously fluctuate into and out of existence.

In the presence of gigantic amounts of energyof the sort produced by the collapse of a giant starprevious research found these virtual particles can polarize, or arrange themselves depending on their properties, much as magnets are divided into north and south poles. Carballo-Rubio calculated the polarization of these particles can produce a surprising effect inside the powerful gravitational fields of dying giant stars—a field that repels instead of attracts.

Matter and energy curve the fabric of spacetime, resulting in gravitational fields, according to Einstein’s theory of general relativity. Planets and stars have a positive amount of energy on average, and the resulting gravitational fields are attractive in nature. When virtual particles polarize, however, the vacuum they occupy can on average possess negative energy, and “this curves spacetime in a way that the associated gravitational field is repulsive,” Carballo-Rubio says. Which, of course, could prevent the formation of a black hole. (A similar phenomenon causes relatively light stellar remnants to form neutron stars instead of black holes; their gravitational fields are not strong enough to crush neutrons into a singularity.)

Two prior models suggested repulsive gravity might keep stellar remnants from collapsing to form black holes. One proposed stellar remnants instead formed gravastars, objects filled with quantum vacuum overlaid by a thin shell of matter. The other model suggested the result of these collapses were black stars, where “matter and the quantum vacuum are interlaced throughout the structure in a meticulous balance,” Carballo-Rubio says. Both objects still have powerful gravitational fields that profoundly warp light, so they look dark, like black holes.

Carballo-Rubio says there was previously great uncertainty regarding the properties of black stars and gravastars. His new work tackled this issue by creating a mathematical framework that incorporated the effects of repulsive gravity into equations describing the expansion and contraction of stars, a problem “that was thought to be tractable only with the help of computers,” he notes. His new model suggests a hybrid of a black star and a gravastar could exist—one where matter and quantum vacuum are spread throughout the structure, but with matter in higher concentrations in the shell than in the core. Carballo-Rubio detailed his study online February 6 in Physical Review Letters.