Good News For The Search For Life, The Trappist System Might Be Rich In Water 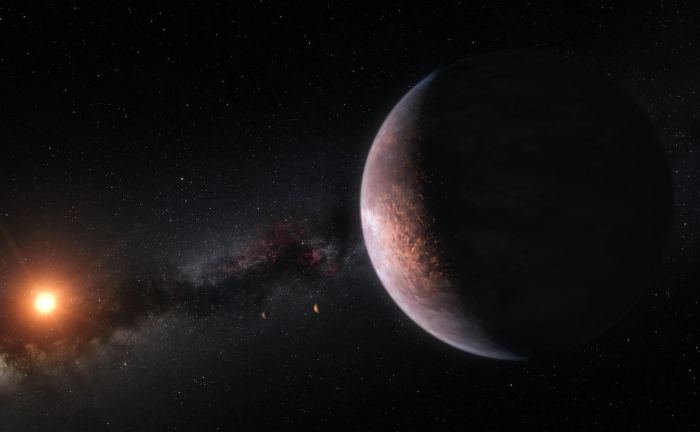 When we finally find life somewhere out there beyond Earth, it’ll be at the end of a long search. Life probably won’t announce its presence to us, we’ll have to follow a long chain of clues to find it. Like scientists keep telling us, at the start of that chain of clues is water.

The discovery of the TRAPPIST-1 system last year generated a lot of excitement. 7 planets orbiting the star TRAPPIST-1, only 40 light years from Earth. At the time, astronomers thought at least some of them were Earth-like. But now a new study shows that some of the planets could hold more water than Earth. About 250 times more.

This new study focuses on the density of the 7 TRAPPIST-1 planets. Trying to determine that density is a challenging task, and it involved some of the powerhouses in the world of telescopes. The Spitzer Space Telescope, the Kepler Space Telescope, and the SPECULOOS (Search for habitable Planets EClipsing ULtra-cOOl Stars) facility at ESO’s Paranal Observatory were all used in the study. This artist’s impression shows several of the planets orbiting the ultra-cool red dwarf star TRAPPIST-1. New observations, when combined with very sophisticated analysis, have now yielded good estimates of the densities of all seven of the Earth-sized planets and suggest that they are rich in volatile materials, probably water. Image: ESO/M. Kornmesser

In this study, the observations from the three telescopes were subjected to complex computer modelling to determine the densities of the 7 TRAPPIST planets. As a result, we now know that they are all mostly made of rock, and that some of them could be 5% water by mass. (Earth is only about 0.02% water by mass.)

Finding the densities of these planets was not easy. To do so, scientists had to determine both the mass and the size. The TRAPPIST-1 planets were found using the transit method, where the light of the host star dips as the planets pass between their star and us. The transit method gives us a pretty good idea of the size of the planets, but that’s it.

It’s a lot harder to find the mass, because planets with different masses can have the same orbits and we can’t tell them apart. But in multi-planet systems like TRAPPIST-1, there is a way.

As the planets orbit the TRAPPIST-1 star, more massive planets disturb the orbits of the other planets more than lighter ones. This changes the timing of the transits. These effects are “complicated and very subtle” according to the team, and it took a lot of observation and measurement of the transit timing—and very complex computer modelling—to determine their densities.

Lead author Simon Grimm explains how it was done: “The TRAPPIST-1 planets are so close together that they interfere with each other gravitationally, so the times when they pass in front of the star shift slightly. These shifts depend on the planets’ masses, their distances and other orbital parameters. With a computer model, we simulate the planets’ orbits until the calculated transits agree with the observed values, and hence derive the planetary masses.”

So, what about the water?

First of all, this study didn’t detect water. It detected volatile material which is probably water.

Whether or not they’ve confirmed the presence of water, these are still very important results. We’re getting good at finding exoplanets, and the next step is to determine the properties of any atmospheres that exoplanets have.

Team member Eric Agol comments on the significance: “A goal of exoplanet studies for some time has been to probe the composition of planets that are Earth-like in size and temperature. The discovery of TRAPPIST-1 and the capabilities of ESO’s facilities in Chile and the NASA Spitzer Space Telescope in orbit have made this possible — giving us our first glimpse of what Earth-sized exoplanets are made of!” This diagram compares the sizes, masses and estimated temperatures of the TRAPPIST-1 planets with Solar System planets. The colours indicate temperatures and the black line matches the densities and composition of the terrestrial planets in the Solar System. Planets above the line are less dense and planets below are more dense. Image: EXO/S.Grimm et. al.

This study doesn’t tell us if any of the TRAPPIST planets have life on them, or even if they’re habitable. It’s just one more step on the path to hopefully, maybe, one day, finding life somewhere. Study co-author Brice-Olivier Demory, at the University of Bern, said as much: “Densities, while important clues to the planets’ compositions, do not say anything about habitability. However, our study is an important step forward as we continue to explore whether these planets could support life.” This diagram compares the masses and energy input of the seven TRAPPIST-1 planets, along with the properties of the four innermost Solar System planets. Image: NASA/JPL-Caltech

This is what the study determined about the different planets in the TRAPPIST system:

The TRAPPIST-1 system is going to be studied for a very long time. It promises to be one of the first targets for the James Webb Space Telescope (we hope.) It’s a very intriguing system, and whether or not any of the planets are deemed habitable, studying them will teach us a lot about our search for water, habitability, and life.