Look Inside the Orion Nebula 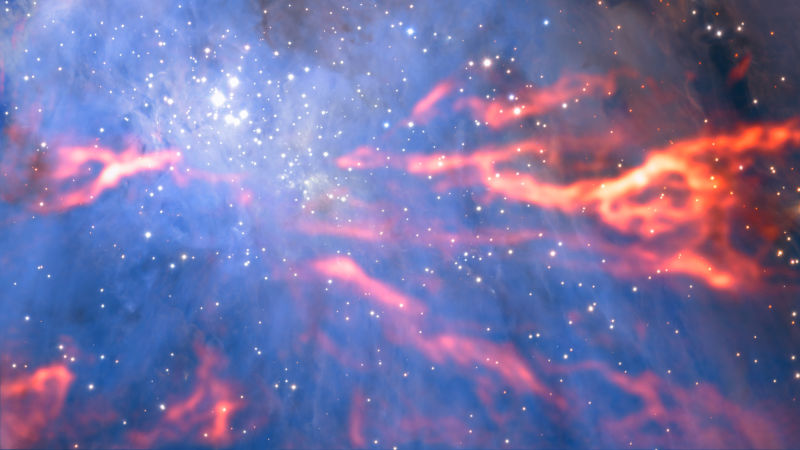 New ALMA observations reveal a fiber-like structures within a longer, well-studied filament in the Orion Nebula. These fibers contain the seeds of future stars.

Stars are spherical, and so are the gaseous seeds out of which they collapse. Yet new observations are showing that the massive clouds that are home to those seeds aren’t spherical at all — within those clouds, gas collapses first into dense fibers that braid into long, thin filaments.*

American astronomer Edward Barnard first noticed these filaments in star-forming regions in his 1919 catalog “On the dark markings of the sky.” He called them “vacant lanes” (because they appear dark and empty when seen in visible light) and wondered about their connection to nearby infant stars. But it took decades for astronomers to resolve the details and fully realize the connection.

Back in 2015 Alvaro Hacar (now at Leiden University, The Netherlands) and colleagues found that a 30-light-year-long filament was actually more like a rope made of smaller bundles of “fibers.” These denser regions of gas are each typically 1½ light-years long. The seeds of future stars — compact areas that will eventually collapse into stars but haven’t yet — can be seen as knots in these braids.

Hacar thought fibers might act like Legos — the fundamental building blocks of star-forming regions. But that conclusion came from observations of a relatively sparse region in Taurus that would only ever form low-mass stars. It wasn’t clear whether the bundle-of-fibers scenario seen in low-mass star-forming regions would apply to the denser environments where high-mass stars (stars with more than eight times the Sun’s mass) form.

Some thought that denser regions would have more massive fibers. If so, they’d be less stable and would fragment more easily. Or, such regions might simply have more bundles, rather than more massive ones. The latter prediction would fit in line with the Lego scenario.

High-mass star-forming regions are rare and far away, making them difficult to observe. So to investigate their idea in denser regions, Hacar and colleagues turned to the sharp-eyed Atacama Large Millimeter/submillimeter Array.

ALMA zoomed in on a 20-light-year-long Integral-Shaped Filament that crosses two massive star-forming regions in the Orion Nebula, dubbed Orion Molecular Complex 1 and 2. The observations trace emission from structures as small as 2,000 astronomical units across. (That’s quite the feat for something that’s 1,350 light-years away; it’s equivalent to resolving a 5-mile-wide crater on the Moon.)