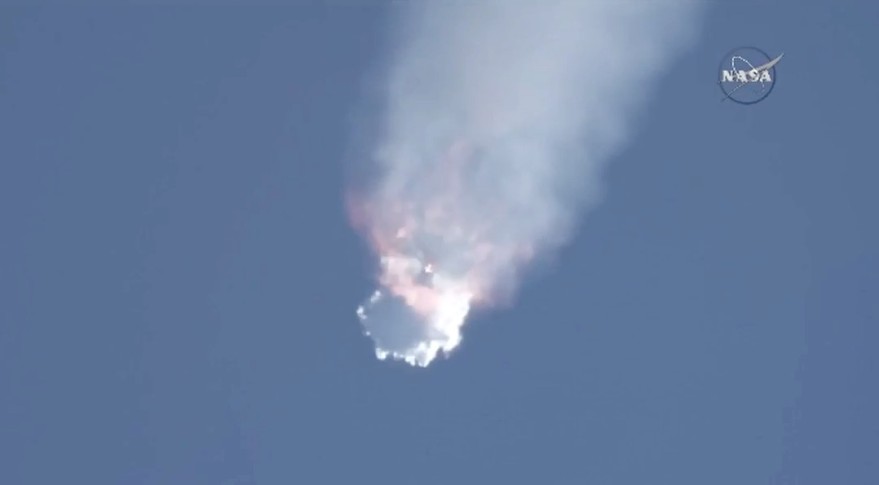 WASHINGTON — A NASA investigation into a 2015 SpaceX launch failure concluded a design flaw, rather than a manufacturing defect, likely initiated the chain of events that destroyed the vehicle.

NASA released March 12 a public summary of the report by an independent review team convened by NASA after the June 2015 accident during the launch of a Dragon cargo spacecraft bound for the International Space Station, a mission known as CRS-7. That investigation was performed by NASA’s Launch Services Program at the request of the agency’s associate administrator for human exploration and operations, Bill Gerstenmaier, in parallel with SpaceX’s own investigation into the failure.

In that failure, the vehicle suffered an “anomalous event” in the second stage liquid oxygen tank 139 seconds after liftoff, causing the vehicle to break apart. The investigation was a challenge, NASA noted in its report, because the accident happened so quickly, with no sign of “obviously degrading or trending conditions” prior to the event.

“In other words,” the report stated, “the vehicle went from flying fine to conflagration in less than a second, or ‘within a blink of an eye.’”

The NASA investigation, like the SpaceX one, tracked down the most likely cause of the failure to a composite overwrapped pressure vessel (COPV), filled with helium, that came loose in the second stage liquid oxygen tank. The COPV was able to accelerate upwards due to its buoyancy, according to the report, hitting the dome at the top of the liquid oxygen tank with “great force” and rupturing it.

The two investigations differed, though, on why the COPV came loose. SpaceX concluded the most probable cause that a bolt called a “rod end” suffered a “material defect” that caused it to break, liberating the COPV. SpaceX publicly stated that conclusion a few weeks after the accident. The company no longer uses that strut in its vehicles.

However, the NASA investigation concluded that the rod end could have also suffered manufacturing damage or been installed improperly, among other “equally credible” possibilities.

The NASA investigation also identified what it called a “design error” for the tank: the use of “industrial grade” rather than “aerospace grade” stainless steel for the rod end. That material was not properly modeled or tested for use in that application, the report noted, and did not have a 4:1 factor of safety recommended by the manufacturer.

“This design error is directly related to the Falcon 9 CRS-7 launch failure as a ‘credible’ cause,” the NASA report concluded.

The report also identified other general issues with the use of commercial parts and other vehicle design elements, such as potential for increased latency in its telemetry system. It recommended SpaceX pay more attention to the use of commercial parts. “SpaceX should apply particular emphasis to understanding manufacturer’s recommendations for using commercially sourced parts in flight critical applications,” it stated.

SpaceX argued that all potential causes, including those identified by NASA, were corrected prior to the vehicle’s return to flight.

“NASA Launch Services Program’s independent review came to the same conclusion as SpaceX – that all credible causes for the anomaly were corrected or mitigated by SpaceX before the company returned to flight,” a company spokesman said March 16. “We appreciate NASA’s insight and continued partnership, and we look forward to next month’s launch of a flight-proven Dragon for the company’s fourteenth resupply mission to the International Space Station (CRS-14) as well as the launch of the Transiting Exoplanet Survey Satellite (TESS) for NASA.”

NASA didn’t disclose why it was releasing the report summary, completed in late 2015, more than two and a half years after the accident. In a statement, NASA said it issued the public summary “to maintain historical data of the mishap.”

That accident involved the 1.1 version of the Falcon 9, an older version of the rocket retired after the January 2016 launch of the Jason-3 Earth observation satellite for NASA. In its statement this week, NASA noted that it approved that launch after “all credible causes and technical findings identified by the independent review team were corrected and/or mitigated by SpaceX.”

Some in Congress had been seeking details about that NASA investigation. Report language accompanying the Senate version of a fiscal year 2018 appropriations bill that funds the Federal Aviation Administration instructed the FAA to “provide a report on the findings regarding a June 2015 catastrophic launch failure by a commercial launch provider,” a reference to the Falcon 9 accident. That launch was licensed by the FAA’s Office of Commercial Space Transportation

“The report must consolidate all relevant investigations by, or at the request of, the Federal Government that were conducted, including those completed by NASA as part of the FAA report, and must also include a summary suitable for public disclosure,” the report stated. That legislation has not passed, and Congress has yet to complete an overall spending bill for fiscal year 2018.