On This Day In Space! July 4, 1997: Mars Pathfinder Lands on Red Planet 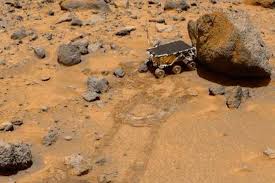 Welcome to “On This Day … in Space!” where we peer back in our archives to find historic moments in spaceflight and astronomy. So enjoy a blast from the past with Space.com’s Hanneke Weitering to look back at what happened on this day in space!

On July 4, 1997, NASA’s Mars Pathfinder mission arrived on Mars and began transmitting images from the surface of the Red Planet. The rover, named Sojourner, was the first rover to successfully land on Mars. Sojourner was accompanied by a lander now named the Carl Sagan Memorial Station.

The mission used an innovative landing system to touch down on the surface. NASA cocooned the rover with airbags to cushion the impact after a parachute slowed down the fall. Pathfinder touched down in a region of Mars called Ares Vallis — an ancient flood plain that NASA chose because it was relatively safe but still had plenty of rocks to study.

While the Pathfinder lander took pictures of the Martian sky and collected meteorological data, the Sojourner rover studied Martian rocks and soil with its three cameras and an Alpha Proton X-ray Spectrometer, which allowed it to analyze the chemical composition of samples from the surface.

In 2015, Pathfinder had a cameo in the hit science fiction film “The Martian,” when it was recovered by stranded astronaut Mark Watney (Matt Damon), who used it to restore communications with Earth.