Setting up the stage for Android Oreo (Go Edition), Google has now released the Gmail Go app. The new app, which is compatible with devices running Android 8.1 Oreo and later, is available for download on Google Play store. It comes weeks after the release other Go edition apps, including Files Go, Gboard Go, Google Go, Maps Go, and YouTube Go. The app supports most of the basic features of Gmail as well as offers you multiple account support to let you set up both Gmail and non-Gmail addresses, such as Outlook.com, Yahoo Mail, or other IMAP/POP email accounts, instantly.

The APK file size of the Gmail Go app is significantly smaller than the regular Gmail app; it’s 9.51MB versus 20.66MB. This makes the app lighter when installed, consuming around 25MB on compatible devices – contrary to the 47MB space consumed by its regular version. Despite its lightweight build, the Gmail Go app provides you with an advanced inbox that categorises social and promotional emails under different tabs to help you focus on important messages first. 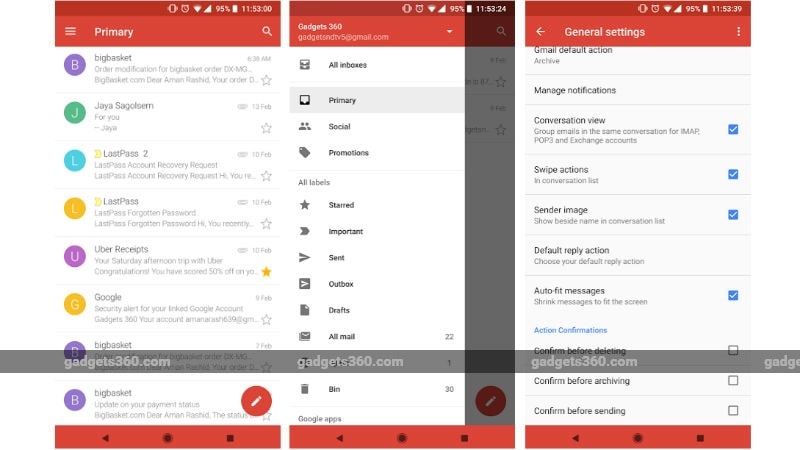 The app also supports the convenient conversation view that groups emails for all IMAP, POP3, and Exchange accounts under one roof. Similarly, Google has given support for swipe actions and sender images in the conversation list. The interface of the new app is also quite identical to the original Gmail for Android, though you may notice the change in the user profile section that sits on top of the title bar and displays your profile photo and background image on the regular Gmail app.

Why Google Is Bullish About Android Oreo (Go Edition)

In order to make the experience safer for end users, the Gmail Go app automatically blocks spam messages using Google’s internal data sets and algorithms. You are also provided with the option to report any of the new emails as spam or mark it as important to get it right in the Primary tab. Further, you can add a label to your emails to categorise them as per your requirements. The app also allows you to manage how frequent you’d like to receive notifications by disabling alerts for social or promotional messages.

The overall experience of the Gmail Go app is quite similar to what you can get from the regular Gmail app. However, we did notice some lag when tested the app on an Android 8.1-running Pixel 2 XL. This may be due to some bugs that are likely to be fixed ahead of the release of Android Go devices. Of course, the prime purpose of the Gmail Go app is to provide Gmail access amidst using less RAM and data.

Meanwhile, you can visit Google Play to download and test the Gmail Go app on your Android 8.1 device. Its latest APK file is also available for download through APK Mirror.