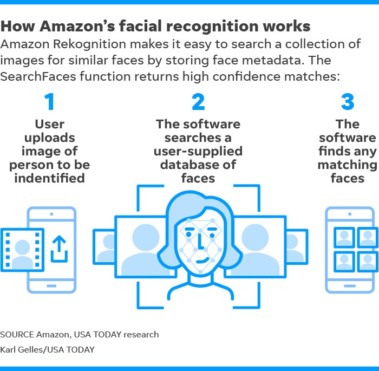 SAN FRANCISCO — The Orlando Police Department in Florida is planning to continue its test of a facial recognition program from Amazon, despite outcry from civil rights and privacy groups that law enforcement and government agencies could abuse the technology.

OPD announced last month that the trial proof of concept run of the software had expired, but OPD public information officer, Sgt. Eduardo Bernal, said in a release Monday that the department will continue its testing of the program.

At least two police departments around the country have been testing the software, and privacy advocates have protested, fearing law enforcement might abuse the technology.

In May, civil rights and privacy groups, including the American Civil Liberties Union, demanded that Amazon stop selling Rekognition to law enforcement and other government entities because they fear it could be used to unfairly target protesters, immigrants and any person just going about their daily business.

“Amazon should be protecting customers and communities, it should not be in the business of powering dangerous surveillance,” said Matt Cagle, an ACLU attorney.

The tool is used by many companies and organizations beyond law enforcement. Amazon says it has been used to find abducted people and that amusement parks have used it to find lost children.

During the royal wedding of Prince Harry and Meghan Markle in May, British broadcaster Sky News used Rekognition to help it identify celebrities at they entered Windsor Castle.