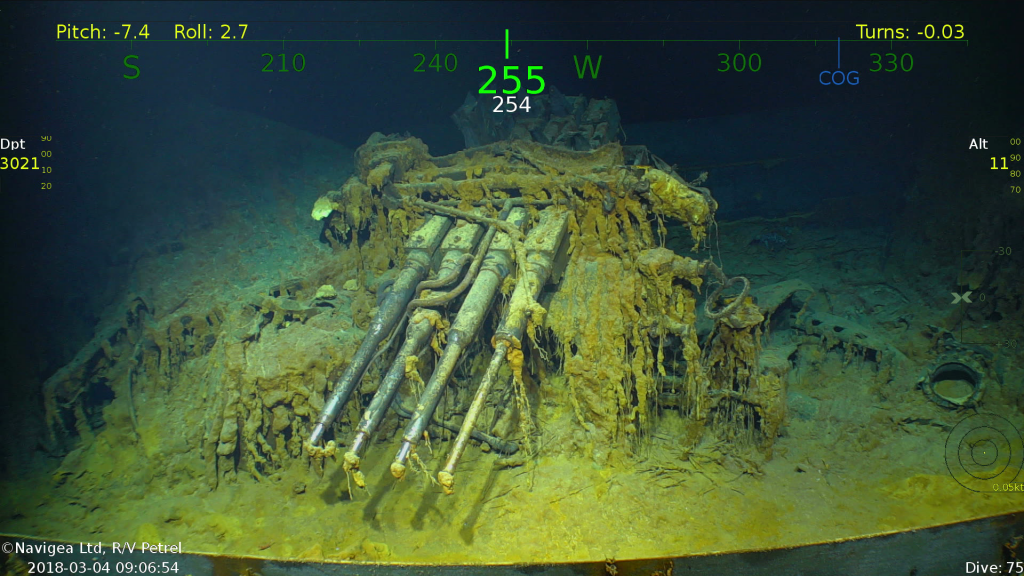 When the aircraft carrier USS Lexington sank beneath the surface of the Coral Sea, it represented a significant casualty of history’s first clash between carriers during World War II. 76 years later, an expedition led by Microsoft co-founder Paul Allen announced that it had rediscovered wreckage from the carrier known as “Lady Lex” lying on the seafloor about 500 miles off the eastern coast of Australia.

The loss of the USS Lexington took place during the Battle of Coral Sea: a battle that marked the first time rival aircraft carriers ever engaged one another in combat with ships from opposing surface fleets never coming within sight of one another. On one side, the Imperial Japanese Navy had launched a seaborne invasion force, including a light carrier and two fleet carriers, aimed at taking Port Moresby in New Guinea for the purpose of building an air base that could threaten Australia. On the other side, the U.S. Navy sent USS Lexington and another carrier, USS Yorktown, along with supporting warships from the Royal Australian Navy to intercept the Japanese force.

Both sides adopted a philosophy of “the best defense is a good offense” by seeking to find and knock out the rival aircraft carriers before the other side could retaliate. On May 7, the battle began in earnest with U.S. and Japanese scout planes mistakenly reporting that they had found the other side’s main carrier forces. Japanese air attacks crippled a U.S. oiler ship and sank its escort destroyer. On the other side, U.S. Navy planes drew first carrier blood during the battle by sinking the Japanese light carrier Shoho.

The pivotal events of the Battle of Coral Sea took place the next day. On May 8, U.S. Navy planes struck and damaged the Japanese fleet carrier Shokaku, but failed to locate the sister carrier Zuikaku that was hiding under the cover of low clouds. Japanese warplanes retaliated by bombing both the USS Lexington and Yorktown; they also struck the Lexington with torpedoes.

Still, the Lady Lex remained afloat and operational until additional explosions spread fires throughout the ship. After the carrier’s crew was forced to abandon ship, the U.S. Navy’s escort destroyers deliberately scuttled the Lexington and sent the ship to the bottom.

The USS Lexington was not the first carrier to ever go down in battle. On September 17, 1939, a German submarine torpedoed and sank the British carrier HMS Courageous not long after the start of World War II in Europe. Almost two and a half years later, the U.S. Navy’s first aircraft carrier called USS Langley was intentionally scuttled by its own escort destroyers after being left dead in the water from crippling attacks by dive bombers from the Imperial Japanese Navy. And the Japanese light carrier Shoho was sunk before the Lexington during the Battle of Coral Sea.