This High-Tech Planetarium Is on a New Cruise Ship 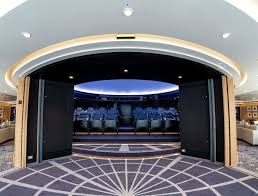 Viking Orion, the newest Viking Ocean Cruise ship, made its debut in Italy on June 14, revealing a unique high-tech feature: a planetarium at sea.

The ship is named after the constellation Orion (the hunter) and NASA’s Orion spacecraft, the first crewed capsule designed to carry astronauts beyond low Earth orbit. The ship’s name also honors retired NASA astronaut Anna Fisher, who is the “godmother” of Viking Orion and worked on the Orion spacecraft before retiring in May 2017.

The planetarium, called the Explorers’ Dome, features shows about space and exploration, including two 3D films: “Journey to Space” and “Under the Arctic Sky.” [Cruising Constellations: Sailing the Maiden Voyage of ‘Viking Orion’]

“The Explorers’ Dome onboard Viking Orion is currently the highest-definition 7K planetarium in the world,” Ralph de Klijn, Viking’s executive director of ocean operations, told Space.com. “The Explorers’ Dome is a versatile space that can operate as a high-tech planetarium, as well as show films and other programming in 2D or 3D.”